5PM visit from the giraffes 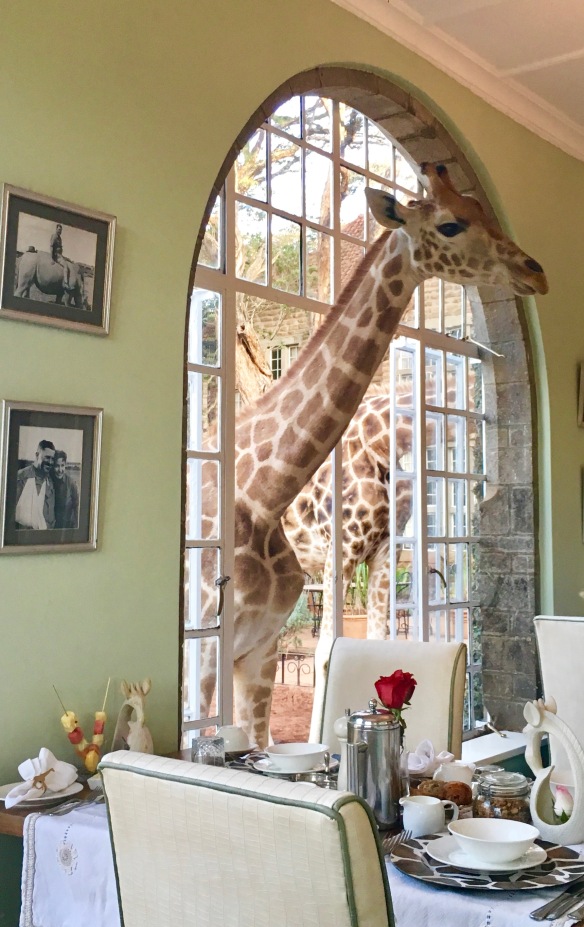 Probably the most unique hotel in the world, Giraffe Manor was created by Jock and Betty Leslie-Melville. They were very interested in animal conservation, and bought the faux Scottish hunting lodge, in 1974. That year, the amiable giraffes, who kept poking their heads interestedly through the first-floor bedroom window were about to be dispossessed, their habitat lost to farmland development and their lives threatened.
Betty persuaded her husband to allow the giraffes to live on their 15-acre estate, and the couple began the African Fund for Endangered Wildlife, based in Kenya and Maryland, which later bought an additional 105 acres for the giraffes. They adopted Daisy, one of the highly endangered Rothschild’s giraffes—which can be as tall as 20 feet, making them the tallest of the species. Daisy’s descendants have since proliferated, and the Leslie – Melvilles added the Giraffe Center, open to the public, on the southern part of the property.

Catherine Whitworth has spent 18 years in the travel industry, over 3 of those with the Brownell team. She has specialized for many years in Africa, Southeast Asia, India, and Paris. Catherine has a particular love for France, as she lived in Paris every summer for several years on Isle St. Louis.

Catherine is passionate about travel and loves the excitement of sharing her personal experiences—whether that is a restaurant recommendation, activity suggestion, or even sharing her favorite places to shop. She aims to give every client an unforgettable experience with the biggest “bang” for their buck. She wants her clients to have insider, private, and “out of the way” travel experiences that will form memories of a lifetime.

If you are interested in planning a honeymoon, family vacation, celebration, negotiating with a resort for a destination wedding, or independent travel, please go to contact me on the menu list.